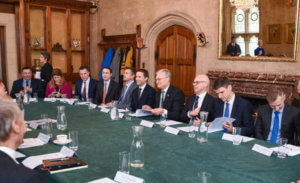 During the visit in London for the NATO summit, President Gitanas Nausėda on Tuesday invited City’s financial companies to develop their business in Lithuania.

According to the president, Lithuania already is a leading fintech hub in Europe.

“We are very advanced in cybersecurity and anti-money laundering, so we really have something to offer the UK market,” Nausėda said in a press release after meeting with Catherine McGuinness, chairwoman of the Policy and Resources Committee of the City of London Corporation.

President’s office said earlier on Tuesday that Nausėda will invite British finance and financial technology companies, such as Credit Suisse, HSBC, Innovate Finance, JP Morgan, KPMG, Revolut, Moody’s, UK Finance and others, “to start and develop their business in Lithuania”.

Nauseda also took part in a round-table discussion with top executives of the City’s major financial companies and fintech firms.

The president emphasised that Lithuania will maintain close political, economic and defence relations with the United Kingdom after Brexit, according to the press release.